Everything in our mountain is unique whether it is food, water or environment. The species of animals here are also different. The most popular animal among the hill animals is “Bhotia Dog”. On hearing this name, everyone portrays a big, big-jawed, aggressive, large-bodied dog in his mind. Bhotia dog is quite popular in the mountains for its loyalty. Seeing his magnificent body, the wild animals of the mountains like tigers, leopards, guldars etc. retreat once. Normally, this nomad is inhabited by people who raise sheep and goats. When the opportunity arises, he confronts the biggest wild animal for the protection of his owner and cattle.

In the changing environment, Bhotia is now being found in the lowland areas from the hilly areas. Generally people now raise them for home security. It is for aggressive wild animals, as sharp and alert as it is for the protection of its family owner. Their ability to eat more and more food makes them strong. Beyond other dog species, the Bhotia species is the most intelligent, obedient and aggressive. 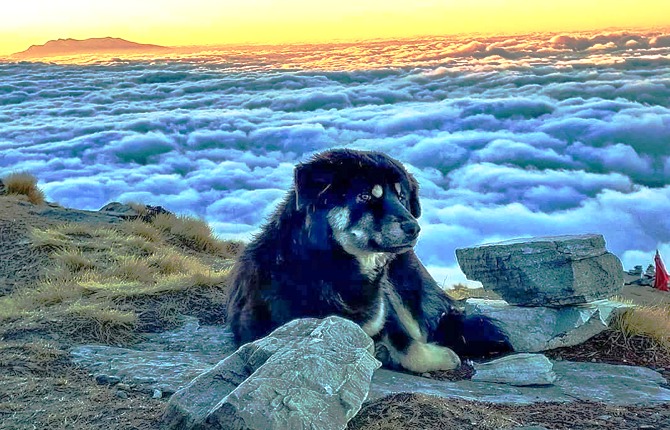 The Bhotia dog is a breed of livestock or sheep-guarding dog found in northern India, especially those found in the Western Himalayan region and the states of Himachal Pradesh and Uttarakhand. They are also called Himalayan Sheepdog, Indian Panther Knoll, as well as Mahidant Mustiff and Gaddi Dog. The Bhotia dog is widely used by local shepherds for the purposes of hunting and protecting animals from tigers, guldars or leopards. Mostly Bhotias (from the South Asian tribe of the same name), they are used by mountain shepherds to prevent attacks by leopards and to counter-attack. A specialty of Bhotia is that it collects a flock of sheep and goats at one place.

This breed is similar to the Tibetan Mastiff and belongs to the long-haired Kinnaur Sheepdog of Tibet. Naturally, the Himalayan sheepdog, or Bhotia, enjoys outdoor lifestyles and has been found less in other regions of India. As a powerful and strong breed, Himalayan Bhotia is mainly used for animal husbandry and defense purposes. Bhotia is regionally popular with a loyal companion as well as for protection of flocks. Four commemorative postage stamps for four breeds (Saik) i.e. Himalayan Sheep Dog or Bhotia, Rampur Hound, Mudhol Hound and Rajatilakam were issued by India Post on 9 January 2005.

Due to its active and fast-paced nature, this breed is not meant to be kept indoors for long. The Himalayan Sheepdog, or Bhotia, is commonly used as a herd dog or watchdog and requires a large amount of outdoor exercise.

Obedience training will not be required to domesticate this breed. Training this breed can be difficult due to its independent and stubborn nature. Bhotia obeys only those whom he believes. Proper care of this breed includes daily exercise and training. Bhotia becomes cruel to strangers over his master at the time of calamity. However, Bhotia has great affection for children. They are loyal to their owners. Along with being cautious and territorial, they are also gentle towards their owners, making them suitable family pets.

However, the history of Bhotia dogs is not well known. This breed is believed to have existed in the high Himalayan regions since ancient times. Local tribes have used dogs as guard dogs or shepherd dogs because of their nomadic occupations. Himalayan Bhotia was commonly used to chase away predatory animals and protect herds of cattle. Throughout its history, this breed was used for hunting. Currently, this breed is common only within the boundaries of India.

Please tell us how you felt about this information given by us. If you liked the article please share it with your friends and family. We will continue to bring such interesting articles related to our mountain in future for you.