India’s spiritual prosperity is appreciated all over the world. Being the home of different religions, there are various pilgrimage sites in India. The best part is that there are many areas where holy sites of different religions come together. One such unique amalgamation can be seen in Chamoli district of Uttarakhand, where one can visit Shri Hemkund Sahib Ji, the holiest destination of Sikhs and the holy shrine of Hinduism, Badrinath Temple.

The basis of Hemkund Sahib Ji is many folklores. One such folk story is from the pages of Ramayana. According to legends, when Meghnath’s deceit seriously injured Lord Lakshmana, the deity was brought to the banks of Hemkund (at that time Hemkund was known as Lokpal Lake). It is believed that Lord Lakshmana’s wife cried and prayed profusely for the life of her husband, which prompted Sri Hanuman to bring Sanjeevani Booti – the revitalizing herb. When Shri Lakshmana recovered and hailed, the gods showered flowers from heaven. Those flowers formed the roots of the Valley of Flowers.

Another mythological belief comes from Guru Gobind Singh’s short autobiography ‘Bachittar Natak’. Guru Gobind Singh Ji was the tenth Sikh Guru, who is believed to have lived in Hemkund in his first life. In Guru Gobind Singh’s autobiography, he mentions his earlier incarnation as Rishi Dushta-Daman and his stay at Lokpal Lake. According to the belief, the great sage Roush-Daman meditated for a long time and then submerged in the Lord. This place and the Gurudwara were not open until the 20th century. 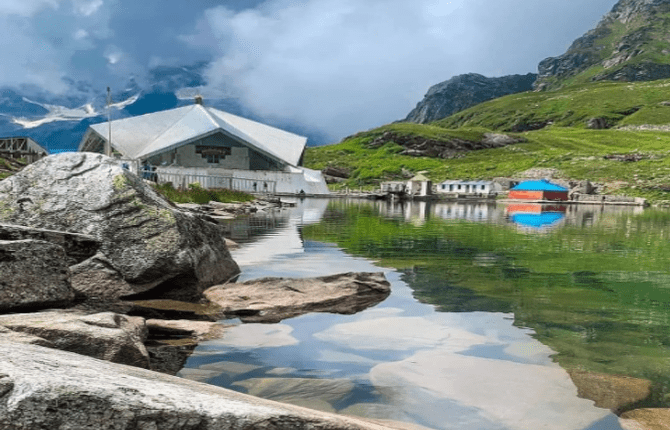 Surrounded by seven beautiful peaks, Hemkund Sahib Ji offers both peace and spiritual enlightenment to the pilgrims. The Gurudwara at this place is known for its star-shaped architecture. It is believed that this Sikh shrine was initially founded by Sant Sohan Singh, who was an army officer. Later after his demise, Halwinder Modan Singh (the man who helped Sant Sohan Singh) renovated the present gurdwara.

Hemkund Sahib Ji Gurudwara is situated on the shore of Hemkund Lake. This lake is known to wash away the sins of mankind. Pilgrims visiting the Gurudwara first take a dip in the holy water of the lake and then enter the temple.

Hemkund Sahib Ji Yatra is adorned with the glory of Mother Nature. In addition, this yatra allows the pilgrims to connect with various folklores that bring them closer to the various religions of India.

“Kedartal” The Spiritual Trek To The Lake of Lord Shiva

Kedartal is a lake in the Uttarkashi district of Uttarakhand. Situated at an elevation of […]