Nestled in the lap of the Himalayas and covered with snow sheets, Kausani looks like a beautiful painting of nature. This famous tourist destination of Uttarakhand enchants the visiting tourists with its natural beauty. Due to its lush green forest, high mountains, clear and blue sky, beautiful lakes and so many beautiful views, this place has become the most favorite place for innumerable tourists. Tourists wishing to get a better view of the important peaks like Nandadevi, Trishul, and Panchachuli turn to Kausani. The snow-laden mountains spread over a vast area of ​​the city fascinates the tourists.

Located at an altitude of 1890 meters above sea level, Kausani is a paradise for trekkers. During trekking one can observe tall cedar trees, beautiful waterfalls, and beautiful grass plains. Adventure enthusiasts should visit this area during the monsoon season. Kausani season is very pleasant almost the whole year. But if you do not like very cold weather, then you can visit here between April to June and September to November. During that time the weather here is pink. But people who like cold weather can visit here at any time of the year.

Historically, Kausani has its own special significance. Actually, when Mahatma Gandhi came here in 1929, he stayed in Anasakti Ashram. During his stay, he liked Kausani’s beauty and the serene atmosphere here so much that he named Kausani the Switzerland of India. The days when he stayed here, he was writing a book Anasakti Yoga. Gandhiji has given the name of Anadisakti Yoga by simple translation of the verses of the Gita. Apart from Mahatma Gandhi, the name of another famous personality is also associated with this area. Noted Hindi poet Sumitranandan Pant was born here. He got the inspiration for his many famous works from this beautiful place.

Places To Visit In Kausani

The Rudradhari Falls is a special tourist spot just 12 kilometers from Kausani, surrounded by paddy fields and deodar forests. You can learn about the secrets of ancient caves of this place by trekking in the Adi Kailash region. The Rudradhari falls are said to have a connection with Lord Shiva and Lord Vishnu, near the waterfall one, can find the temple of Someshwar which is dedicated to Lord Shiva. 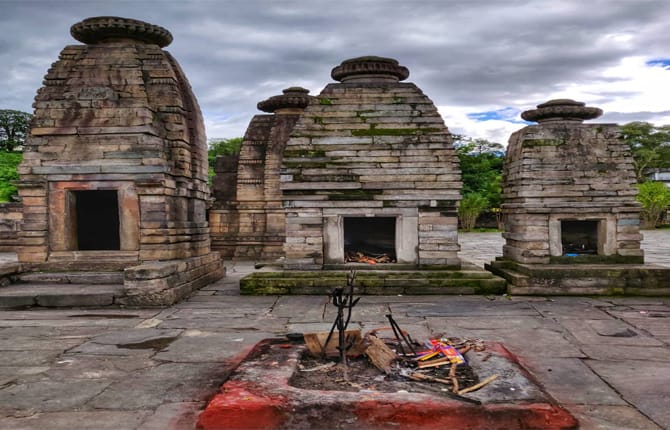 The city of Baijnath is located about 18 kilometers from Kausani, which is one of the major sightseeing places of Kausani. This historic city is decorated with many ancient temples and religious sites. The city once served as the capital of the Katyuri dynasty. The Baijnath temple was constructed during the 12th century and according to legend, Lord Shiva and Parvati were married here at the confluence of the Garur Ganga River and the Gomti River. 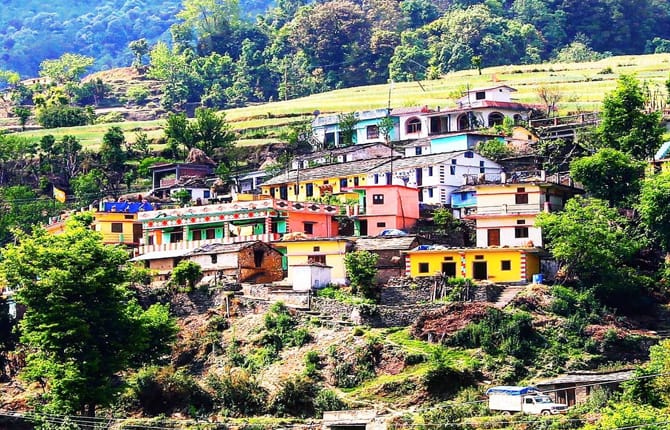 Gwaldam is a beautiful quaint village situated between Garhwal and Kumaon, which is filled with many forests and small lakes. Situated amidst deodar forests and apple orchards at an altitude of 1940 meters above sea level are about 39 km from Kausani. This village also offers fascinating and picturesque views of the peaks like Nandadevi, Trishul, and Nanda Ghuti. 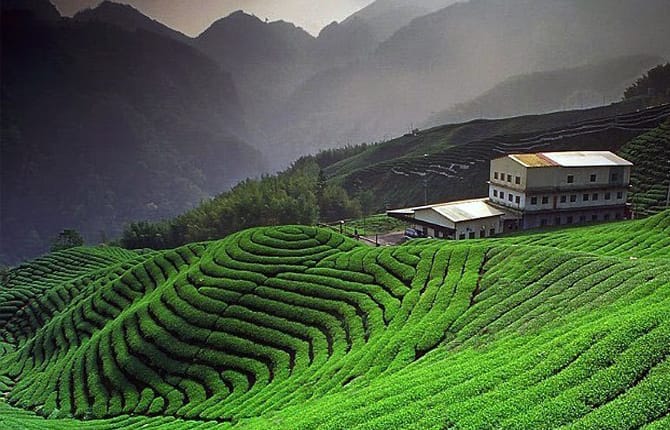 Kausani Tea Estate is a place that is a haven for nature and tea lovers. You will come to this place and feel very close to nature. Kausani Tea Estate, located 5 km from the main city, is spread over an area of 208 hectares. Here you can taste and buy different flavored teas. Due to heavy snowfall in the region, the Kausani Tea Estate remains close from November to March. 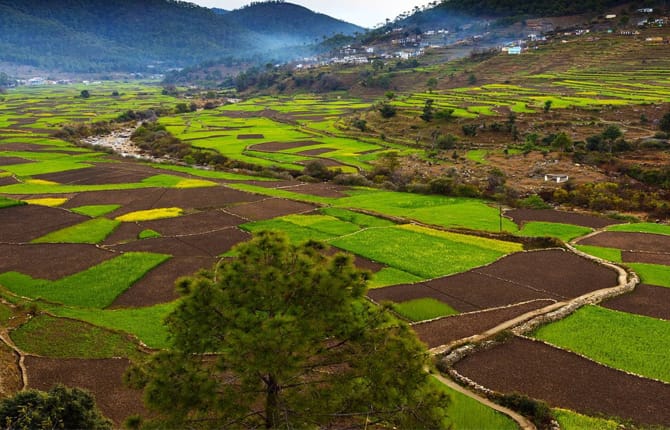 The wonderful valley of Someshwar is well known for its Temple. The presiding god here is Lord Shiva and is a profoundly respected Temple among local people and devotees of Lord Shiva. There is a Shivling located in this temple which is considered as a form of Shakti. Located about 12 km from the famous hill station of Kausani, Rustic and humble in its construction, the temple is a charming experience. The rock-cut shrine of Someshwar will transport you straight to the age of ancient temples. Despite its religious significance, this destination also has some picturesque views and sceneries to offer. Another endearing establishment of the location is the wishing well established near the temple and is believed to grant all the wishes of devotees. 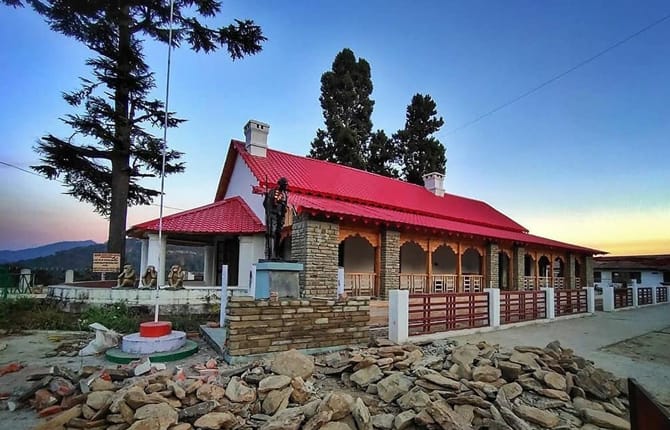 One of the most popular destinations of Kausani, this place is popularly known as Gandhi Ashram. When Gandhiji visited Kausani stayed at this ashram. Today, it attracts a large crowd of tourists and has been converted into a study, research center, and museum along with an accommodation facility with 24 rooms. Many books and photographs related to Gandhiji’s life are available in this ashram. A place with great historical importance, the ashram also has a provision of a kitchen and a library. 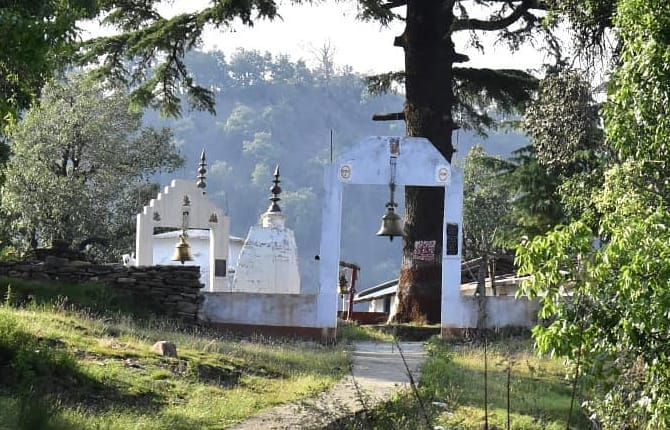 Pinnath is a village in the valley of Gopalkot, which is famous for the Pinnath Temple. Built-in square shape, this temple is dedicated to the Hindu deity Bhairon. The temple has five entrances, which are in the south direction. The walls of the temple are adorned with paintings of Hindu deities. This place is also known for organizing a fair in October every year. To reach this village, situated at an altitude of 2750 meters above sea level, one has to trek for about 5 km from Kausani to reach this village.

Places To Stay In Kausani

Things To Do In Kausani

Planning your trip to Kausani but confused for which month to travel? Then let me tell that the best time to visit Kausani hill station is considered between March – June, and September – November. Kausani attracts many tourists from April to late June due to its geographical location and dense vegetation. The weather of this hill station is very pleasant at this time so that you can explore this tourist place well. From November to March there is a winter season and this place is covered in a white sheet of snow, so if you love enjoying in snow you can visit Kausani in the winter months as well.

How To Reach Kausani

The nearest airport to Kausani is Pantnagar Airport which is 168 km from Kausani. After reaching this airport, you can easily reach your destination by hiring a taxi from outside.

The nearest railway station to Kausani is the Kathgodam railway station at a distance of 134 km. This station is well connected to major cities of India like Delhi, Lucknow, and Kolkata, etc. You will get a continuous train for this place. After reaching Kathgodam via train you can reach Kausani by bus or taxi.

Regular buses run from neighboring states of Uttarakhand to Kausani. If you are traveling from Delhi, you can take the help of regular buses from there.

Chakrata is a hill town with rich green woodlands, old sanctuaries, and caves in the […]

Uttarakhand mesmerizes everyone with its classic natural beauty, which is surrounded by lush green forests […]