Uttarakhand, the 27th state of the country with a population of about 11.5 million people, is divided into 13 districts. All the districts are connected to the mighty Himalayas with some famous pilgrimage sites as well as trek routes that earn billions or rupees every year. Buses, cars, roadside eateries, hotels for overnight stays, sometimes ponies used to carry people along with people, tents used on unmarked paths, guides and porters—all from There is significant revenue generation for the state.

Apart from the sanctuaries and national parks in Uttarakhand that attract thousands of tourists throughout the year, the famous temples and shrines have brought millions of pilgrims since time immemorial. People from all over the world mainly visit these temples to pay respect to our Hindu deities and our ancient Hindu culture. The most popular pilgrimage sites are Yamonotri, Gangotri, Kedarnath and Badrinath along with Panch Kedar and Sapta Badri. There are also some pilgrimage centers of other religions such as Hemkund Sahib for Sikhs who visit in the months of July and August. There are a few lesser known temples in Uttarakhand that are listed in the Archaeological Survey of India, such as the Sun Temple in the village of Kosi-Katarmal and the Jageshwar (Shiva) Temple in Almora District and Baijnath Temple in Bageshwar District, to name one. Some intricately curved old temples.

There are some places in Uttarakhand which are famous for their religious and trekking importance such as Panch Kedar-Kedarnath, Tungnath, Rudranath, Madmaheshwar and Kalpeshwar, among which, Kedarnath is the most visited temple and Sapta Badri, a group of seven Badri temples of Hindu mythology. 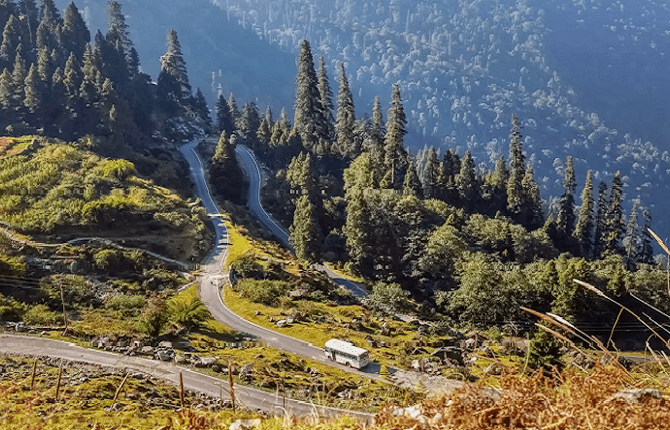 People who want to spend their holidays on an adventurous journey look for trek routes and there are myriad destinations of interest that not only captivate our eyes with their natural beauty but also refresh our spirits. From earlier times, trekkers through dense forests and snow-capped mountain passes from Roop Kund, Pindari-Kafni-Sunderdunga Glacier, Kalindi Pass to Gaumukh-Badrinath, Hemkund Sahib-Valley of Flowers National Park, Garhwal to Sangla Valley arrive. Rupin pass. Some recently added destinations like Nanda Devi Biosphere Reserve, Har-ki Dun etc. to be linked with many others like Deoria Tal near Ukhimath, Dodital near Uttarkashi, Satopanth Tal near Badrinath, Kedar Tal near Kedarnath and Vasuki Tal, Khatling and Milam Glaciers, Kuri Pass, Panwali Bugyal to name a few.

Apart from temples and shrines of Hindu gods and goddesses, pools and glaciers are the main attractions of this paradise. Since they are the main source of various rivers of North India. If one is really interested in knowing about India and its natural beauty, then these are the best places to do so. The serenity and charismatic power of the Himalayas will surely be an unforgettable experience.

These places in Uttarakhand are said to be trekker’s paradise but they are more like pilgrimage as one has to relax and meet nature with most dedicated mind and available resources. With the intense energy of the body to reach some of the most difficult routes like this one requires a lot of experience and knowledge about the Himalayas and its environment. Peace and beauty go hand in hand and one has to understand the magic of that wonderful surroundings in solitude. The majestic Himalaya has challenged people from our glorious past thousands of times, but it never forgives those with ignorance, impatience and inexperience.