Herbal Treatments in Uttarakhand are itself embedded in the history of the state. So here through this blog let us have a glimpse on the ancient Uttarakhand Herbal Tradition, which were quite common in the past and has diminished with the globalisation and modernity. On contrary these practices are still been followed in some outskirts villages of Uttarakhand.

The vegetation found in the forests of the Central Himalayas was considered to be beneficial for keeping healthy, staying healthy and providing longevity. The use of these plants alone or in association with many, mentioned the remedies to eliminate many diseases from the root. In ancient texts, it was said that in the Uttarakhand Himalayas, Devraj Indra gave knowledge to the Bhrigu sage to remain healthy.

Herbs were also collected in the Garhwal Himalayas by the father of Ayurveda, Vaidyaraj Charak. In Uttarakhand, the medical system continued to be a part of the life of the common man through constant research and experiments. The common man also had such knowledge of the vegetation and herbs found around him, so that he could overcome everyday health related disorders.

Many vegetation and seeds that grow nearby would have such qualities that if the body was strong, then the diagnosis of many diseases would be avoided with the balance of diet and use. In every area, there are many people who have authentic knowledge of pharmaceuticals and herbs. Many families were well versed in Vaidyaki. Earlier Vaidyas also got state patronage.

Allopathy became more popular from 1830 AD. The social and economic condition of the experts of traditional medical system deteriorated due to the arrival of British in the mountains and the increase of missionary activities.

Due to the cool climate of the mountain in the British Raj, there was considerable settlement by the British in Nainital, Almora, Dwarahat, Ranikhet, Lohaghat, Mussoorie and Dehradun. Missionary influence on basic works like education and medicine was quite high.

In 1835, the Medical College was established in Calcutta. The trend of allopathy increased. It was successful in curing many incurable diseases and its popularity also increased due to treatment in a short period of time. 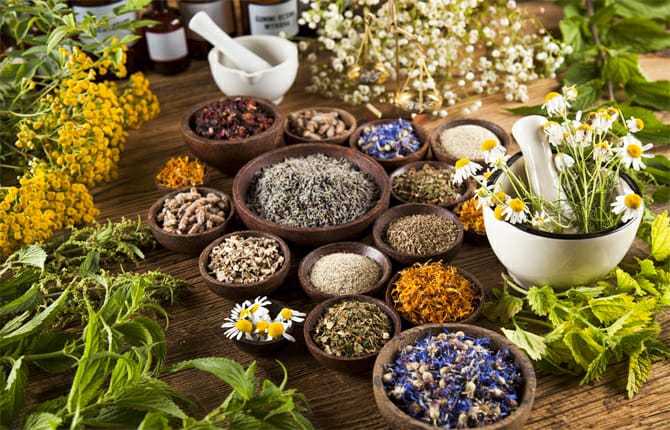 In the 19th century, Jogpur, Jaunsar and Rava Inn Jogut, Tantrikas and Vaidyas of Mussoorie, Dehradun had blown the senses of the white doctors and competed with the British medical system. The British were also surprised to see the benefits of Garhwal’s traditional disease prevention system, but they did not give it social approval. In 1860, Jogte, a Dalit-caste Tumdi of Jaunpur Sakalana, cured an English patient with his mantra, whose treatment was being done by renowned doctor Kenny for a long time. The British patient has recovered and also accepted that no matter how much knowledge he may collect, he cannot win with the natural science of these troubled people. In the 1860s and 1870s, there was the status of the hill tantrikas in Mussoorie and they used to make fun of the British doctors saying that the chanters are free from the rice grains but where the doctor Kenny would be there would be a crematorium. “Chauni ki Daani – Healthy creature. Marghat Ku Vas – Jakh Holu Dakdar Keni “.

In 1868, the President of Mussoorie Municipality, W.D. Hobson also imposed a strict ban on the entry of all the tantrikas and jogis into Mussoorie. Dinesh Prasad Sakalani (2008) clarified in Ayurvedic traditions in Garhwal that Vaidya’s contribution to folk traditional medicine was significant in the nineteenth century. Their knowledge was passed on from generation to generation and the Guru-disciple tradition also thrived.

Suggested Read: Cordyceps Militaris: A Perfect Herb To Fight With All Your Diseases

As the western medical system spread, the traditional medical system did not flourish in the absence of proper protection. The combination of herbs or formulas were kept secret by its proven experts or were passed on from generation to generation. Proper documentation of traditional knowledge also happened very little.

The traditional method based on herbs and pharmaceuticals started to deteriorate due to slow treatment and dietary avoidance of the immediate benefits of allopathy. The income of the Vaidyas became limited and like many ancestral occupations, they did not want their next generation to engage in this inherited business. The government also did not care about such knowledge of heritage and rejected such Vaidyas as neemahims and jholachap.

In Uttarakhand too, as cities developed, allopathic hospitals opened. Ayurveda became limited. Common herbs have also been used to treat many diseases that are continuing from the tradition. Now priority has been given to allopathy. The biggest disadvantage of this was that earlier, under the advice of Vaidya and under the supervision of elders of the family, every member used to gather a lot of information about the medicines and vegetation around him, his use and practice gradually reduced. In the process of going to the city and settling there for employment and work, traditional knowledge continued to be lost. 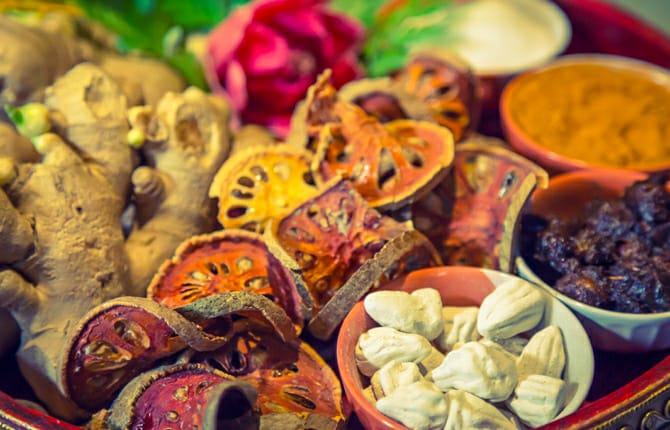 On the other hand, the use of many plants in allopathic medicines was increasing. Gradually their exploitation started increasing. The mandis of Rishikesh, Haridwar, Tanakpur and Ramnagar later became the hub of the wholesale trade of herbs. Herbs cut across the day in the mountain and move from the plains to the factories. This trend started from the British era and the local physicians were shifting to the same remote areas where neither the means of transport were developed nor the British Raj was providing more facilities there.

Many villages in the mountain and many families living in them were ancestrally adept in the knowledge of Ayurveda and Ayurvedic treatment. Despite the growth of allopathy, he continued his business. There were also many families who were continuing this business as a subsidiary business. Before the arrival of the British in Kumaon and Garhwal, there was a monarchy in different forms where astrologers and Vaidyas also enjoyed patronage of the king. Most of them were Brahmins who also had hereditary qualifications about worship method, ritual, astrology, medicine.

Yajman system was also practiced in Vaidyaki. Most of the villages and villages at the group or strip level were Vaidya families who would serve the common people with knowledge of herbs, pharmaceuticals and treatment from generation to generation. Ayurvedic knowledge was versatile in which astrology also had importance with pulse knowledge. On the day of breaking the vegetation, their retention and use, the war, the sides would be fixed. While giving to the patient, his zodiac sign and the results of the horoscope are also taken into consideration. Such manuscripts were found in Uttarakhand, in which there were sources of diagnosis related to Ayurveda and astrology. It was often hand written.

Traditional medicine also included natural methods in which disorders were removed with the help of air, sunlight, water, soil, or ash. Secondly, herbs were identified and used in various ways such as dried cod powder, rasa, gutika, avaleh, asava, arishta, decoction etc. The days of collection, cultivation and use of vegetation from the forest would also be fixed. Vegetation everywhere is also not used. Many metals are also used, which are made to be eroded or incinerated or mixed in other liquids to give powder or liquid form. Smoke treatment was also in practice. All this knowledge would be transmitted orally one generation to another. Along with the use of herbs and pharmaceuticals, insects were also used with animals and birds.

Along with this, spiritual medicine was also practiced. Under this, there was a law of ritual, astrology, chanting, meditation, guarding and worship. Maha Mrityunjaya’s text to avoid serious crisis is an example of this. There are temples in many places of devas, even in the home, its organization was done by observing the date-wise constellation, pat-apat, and the whole law was done. It was also advised to wear various metals and gems and Rudraksha. There is also a separate puja to avoid home distress, loss, loss of a member in the family, anger from ancestors, relief from sight loss. These were determined by the horoscope.

Along with this, there was also tantric medicine in which there was legislation of tantra-mantra-yantra. Tantra is called the scripture of the body and mantra of the mind. Triangles, quadrangle, hexagon, circle etc. were used in many ways on the ground or on wood, metal. In many temples, instruments were installed. Often these would be fiery backs. In these, Puja lessons are also held in different religious events and also for prevention of disease, phantom barrier, Pitar Mukti and to remove the problems of the village or family. The laws and regulations were complex and had the ability of a plea and expert pundit to complete them. The material used is also multiple. In completing the legislation, the planet, constellation, date, war, pat-apat, auspicious signs are taken care of a lot. 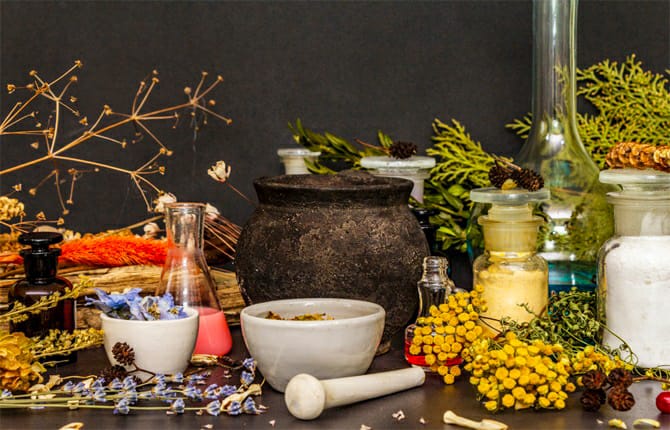 Gods were invoked in divine medicine. They would be praised by many legislation. There were many rituals to please them. There would be many types of people. Along with this, there would have been awareness, wake up, crocodiles, masan and pari pujan at the local level. The traditional method was thus not related to the infusion of the herb juice, the gutka extract, but there was a lot of dispersion.

From the sixth to eighth century, Brahmins settled in Kumaon from East India and South. Also came from Punjab, Himanchal, Nepal and Garhwal. During the time of the Katyuri and Chand kings, the Thul Dhoti Brahmin Raj Durbar had a Guru, Minister, Purohit along with Pandits, Astrologers and Vaidyas. Some Brahmins used to earn a livelihood only by ritualistic, puja lessons. There were also Guru Purohit of Khas Rajputs who earned name from their village and distinguished profession. Pandit Jaydev Pant of Bharadwaj gotra came to the mountains from Konkan. The Mankoti kings of Gangoli gave them to the village Jagir in Rikhadi and Uparada. In this, Pant was held in the mythological position of Rajya Vaidya, Srinath Rajguru and Nathu in three raths of the people. The reputation of Pant Rath continued to grow after the arrival of Almora and the Mankoti kings in the Chand kingdom of Kumaon in 1565 AD.

Suggested Read: 10 Traditional Food Dishes Of Uttarakhand, You Must Taste

Among his four children, the children of Kaaldhar were Vaidya in Sira. So the children of Dasharatha Pandey carried on the tradition of Ayurveda in Anoopshahr. In the fourteenth century, during the reign of King Thoharchand, Upamanyu Gotri Srinivasa Dwivedi in Kali Kumaon was appointed by the king to give the rank of Pandey to the Chauthani Brahmins. These came from Prayag, after being perfected in Ayurveda, their descendants called Vaidya or Mishra settled in Dividia, Kunj, Chhakata and Almora. Chintamani Vaidya of Jujut earned a lot of name in Tire Valley.

In Garhwal, the hospitals were not patronized during the times of King Sudarshan Shah and Bhawani Shah. In case of disease in the family, the nearest Vaidya was called. Shivprasad Dabral writes in History 6 of Uttarakhand that People would have believed that diseases – Shok Devi – crocodile ashes of gods are duly cured by prayers. Then in every village, there were vaidyas who used to give medicines and used to tell them about dieting and moderation. Walton and Atkinson have referred to deity worship, local traditions and methods and the use of herbs to diagnose diseases found in the Himalayas.

According to Dimari in Yoga and Tantric traditions in Uttarakhand, there were scholars of Ayurveda in different districts of Uttarakhand Himalayas. Based on the tradition of Nadi Shastra and handwritten manuscripts, they continued treatment in many disciplines of Ayurveda. They also disciple their descendants.

Hope You Liked The Information Provided, If you have any suggestions or issues regarding the topic then please let us know.